jack: I think the people with that complaint are also su...
Vanamonde: So episode 5 of Ms Marvel put to bed and just one ...
jack: And will he wear the hood?!...
Vanamonde: An oral history of the making of Contact: https...
The Energizer Bunny: Took hubby with me for my walk. This is how it we...
The Energizer Bunny: This made me laugh....
jack: Well maybe your dog should be a little more domina...
jack: Zero faith.... but the Clerks III trailer is funny...
JustaJoe: I am hoping that somewhere on that water tower you...
Rhettro: I noticed that too....

Another great artmash from Jeremy, based on Jason’s initial design. Appropriately named “booty”. Thanks, JfS! (Check out the full-page image here)

Jason C. is the artiste, he calls this piece “yes, my master”. Thanks JC!! Excellent work.

Thanks to Jeremy from Seattle and his photoshop prowess: 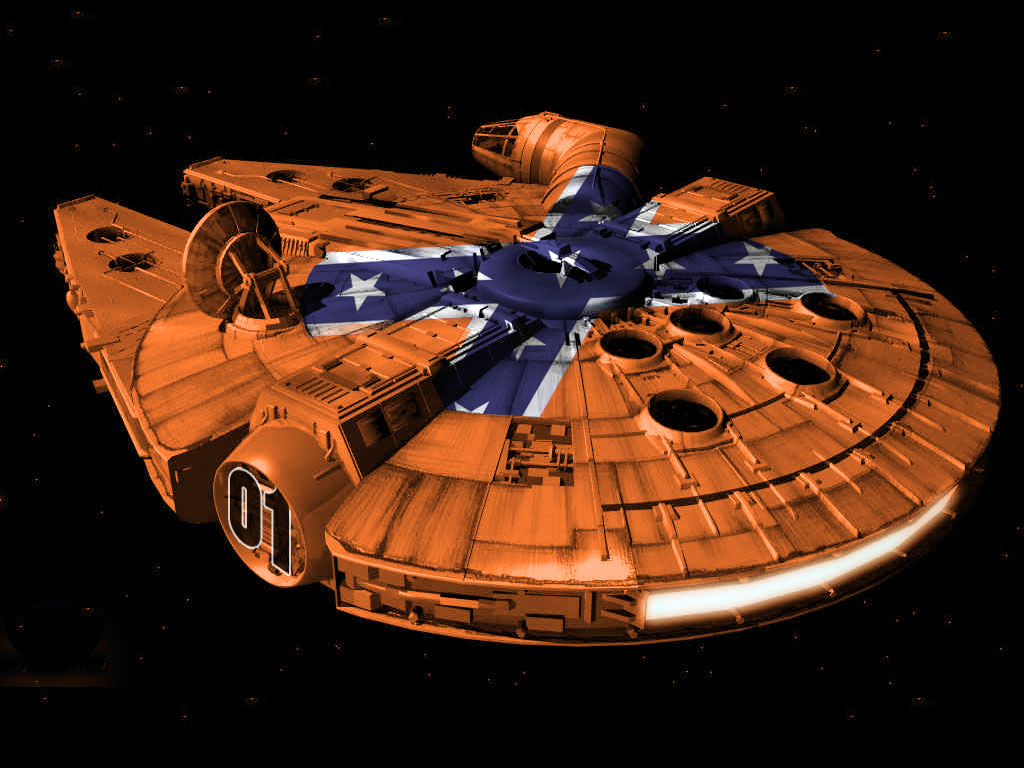 Thanks so much to Alvie in Boulder for contributing this piece!! It’s simply entitled “Duke Wars”. umm…

Go to the magazine’s website, check out the latest issue (a 1MB pdf). Not only is my short story, “Truth or Consequences Motel”, in there, not only is there a story from Jetse de Vries, but there’s also a nice little image of the Spherical Tomi book cover.

Mark Forman displays another one of his talents with this photoshopped image, inspired by the Deadpan’s “Star Wars-Dukes of Hazzard parallels” skit. Thanks Bluesman!

Original music: â€œExeuntâ€?. By yours truly.

Below is a transcript of the Star Wars-Dukes of Hazzard comparisons that I ran in Deadpan episodes 9 and 10. Be sure to listen, if you haven’t already. The sound FX are a big part of it.

So the Deadpan research team has gone back in time and uncovered some very disturbing information. I present now:
Parallels between the original Star Wars series and the Dukes of Hazzard.
{5-second musical mash of Star Wars theme and Dukes of Hazzard opening theme}

â€¢ Both feature a blonde guy and a brown-haired guy as the male leads. Making their way, the only way they know how.
â€¢ Both feature grumpy, lovable, white-bearded, avuncular old-timers in Uncle Jesse and Ben Kenobi.
â€¢ Both have a weird incestuous subtext thing going on with the male and female leads â€“ Lukeâ€™s sister Leia, and cousin Daisy Duke.
â€¢ (In both, everything is basically fine out in bumblef**k, until those dang big cityfolk come around and mess things up.)
â€¢ Both feature main characters named Luke.
â€¢ In both, Luke lives on a farm with his cranky hick uncle.
â€¢ Both are noted for their music.
â€¢ The Boarâ€™s Head = a creepier, rowdier version of the Mos Eisley cantina.
â€¢ Neither one has any black people. Oh right â€“ and when one finally shows up, he ends up double-crossing them.
â€¢ (Both feature the heroes in cool vehicles fleeing from bad guys in less-cool vehicles.)
â€¢ The General Lee horn plays Dixie {General Lee horn}, Lukeâ€™s X-wing has R2-D2â€™s beeps and whistles {R2 beeps and whistles}.
â€¢ Both were popular in the late 70s, early 80s; both made attempts to rejuvenate the franchises in the 2000s, to mixed reactions.
â€¢ Neither one had David Hasselhoff.
â€¢ Both feature the hot female lead in a bikini, at some point.
â€¢ Both feature many scenes of mechanical work being done.
â€¢ One features, {â€œYeehah!â€?} â€“ the other features, {â€œYahoo!â€?}.
â€¢ Both featured vehicles performing aerial stunts which defy the laws of physics.
â€¢ Can we draw parallels between Boss Hogg and the Emperor? Sitting back, running things behind the scenes, while his main henchman, Vader-slash-Roscoe P Coltrane actively pursues and harasses the heroes? Hmmm, I think that Jabba-the-Hutt and Boba Fett is a closer match. George Lucasâ€™s most blatant plagiarism of Boss Hogg would come in the second trilogy in the form of Boss Nass.

This concludes the first half of our investigation. Tune in to next weekâ€™s Deadpan to learn more about this symbiotic, mutually beneficial relationship between these two franchises.

OK, In Episode 9, the JMDP research team discussed commonalities between the Dukes of Hazzard and original Star Wars films. Weâ€™ll conclude their report this week with:
15 ways the Dukes and Lucases could have shared elements, and thus improved their franchises:
{5-second musical mash of Star Wars theme and Dukes of Hazzard opening theme}

For Dukes of Hazzard:

2. The Dukes needed to face some Tuskan Raiders.

3. Get the General Lee competing in a podrace.

6. A turreted laser cannon on top of the General Lee.

7. Star Wars also could have benefited from that narrator, like the Dukes had. {â€œWell right about now, them old Duke droids had found themselves in more trouble than a jawa covered in grits wanderin into the Sarlacc pit.â€? Thanks Michael R. Mennengha}

And finally, in summary, what both franchises needed most:

So Tom asked me awhile ago if I could supply the tablature for my instrumental piece, “Candles”, which was heard at the end of Deadpan episode 5. Thank you for asking, Tom, and I apologize. . . . I just haven’t had the time. Here is a Cliff’s Notes description:

Standard tuning, mostly standard chords. The repeated hook throughout out the song is a pull-off (po) on the first fret of the high string (F po to E) followed by a hammer-on (h) from fret 1 to fret 3 on the B string (C to D). Do this while playing a staggered arpeggiated pattern on a standard Dminor chord (Dm), switch to C, then back to Dm. The change drops the hook, but continues the arpeggiated run through a standard F, C, and Dm. Repeat a few times.

Hey, you know that song at the end of the most recent Deadpan?

Big file, so if everyone clicks at once, you may have a long “Buffering” lag. . . .Â  And Mac users should also note that it’s .wmv.